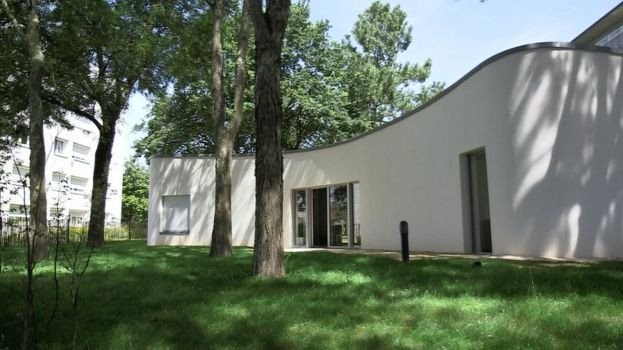 Over this past summer, a French family of five became the first in the world to permanently live in a 3D printed home. The 4-bedroom, 1,022 square foot home was printed on-site in just 54 hours in the city of Nantes France. Over the past few years, 3D-printed structures have been popping up around the globe and at remarkable speeds and costs. From a 650 square foot home in Austin Texas (the first in the US to meet all building codes and be fully-permitted for occupancy) to a 400 square foot home in Russia. Both examples were printed in less than 24 hours for about $10,000, a fraction of the cost of tradition construction methods. While these early prototypes have been done at a relatively small scale, the prospect of wider use for affordable housing could be an exciting reality sooner we think. Two US-based firms (ICON, a robotics construction company, and New Story, and non-profit housing developer) are teaming up to create the world’s first 3D-printed community inEl Salvador. Work on the 100+ unit community is set to being in early 2019 with cost estimates at about $4,000 per house. In Eindhoven, Netherlands, a 5-house 3D printed community is also planned with the first home set to be occupied by next year. As this technology continues to rapidly evolve, we can expect wider application of 3D printed buildings in the coming years from offices to skyscrapers.

Cost of construction.
A major factor in the viability of affordable housing developments are costs, much of which comes from construction of the homes. 3D printed homes can be constructed at a fraction of the cost of traditional construction methods. This is largely driven by amount labor, materials, and time required to complete the home. 3D printing requires very little manual labor, most of the work is completed by a machine printing the main structure. Labor is needed to monitor the machine and install the finishing elements on the building such as the windows, doors, wiring, and the roof. In addition, the accuracy of the printer eliminates the need for time-consuming steps such as laying mortar and insulating. The homes are printed fully-insulated in a tight envelope. Another major cost benefit is that the homes can be printed on-site which dramatically cuts the cost of material transportation and construction logistics. While the data on cost savings is somewhat limited at this early stage, estimates range from 20% to 70% depending on the level of finishing and size of the home.

Flexible designs.
3D printed homes can be configured in flexible shapes and designs. Traditional construction methods, particularly for small residential buildings remains rigid. 3D printers however can be programed to pour concrete as desired, which opens the door for exciting architectural possibilities. Homes can be custom-designed to meet the needs of the residents and respond the context of its surroundings. The building walls can curve to save trees and maintain a natural canopy, or they can follow property lines of irregular shaped lots, the design possibilities are virtually limitless with this technology.

Environmental considerations.
A major advantage of 3D printing over traditional construction is the overall efficiency of the process. This efficiency allows a 3D printed home to have less impact on the environment. It’s estimated that traditional construction produces a waste stream of three to seven tons per house on average. The precision of 3D printing eliminates most of this waste stream because the printer will only use the amount of material needed to complete the design. In addition to less material waste, as noted earlier, the homes are printed in a tight building envelope, which helps to reduces energy consumption once the home is occupied (heating and cooling). The construction timeline also has a big impact on the environment. Printing a home in a matter of days uses less energy than a typical home construction timeline which takes an average of seven months to complete.

The potential of 3D printing technology in the residential housing market is just starting to be understood, but early demonstrations show the shifts could be monumental and on a global scale. While most of these initial pilot homes have been small single-story structures that work well in rural areas, it is only a matter of time before the technology evolves for construction of multi-story buildings on more complex urban sites. The impact of this technology on affordable housing could be dramatic in the coming years. Could entire blocks of vacant, dilapidated, and uninhabitable housing that exists in many of our cities be replaced by new structures within a matter of weeks at affordable prices? Could hurricane and earthquake rebuilding efforts occur over the course of months instead of years? Could the hundreds of millions of families residing in tents and shacks in slums around the world have a solid and safe structure to call home in the coming decades? These are just some of the exciting possibilities that could transform the way we build our homes in the coming years.