Over the past two decades, immigrants have fueled the growth of suburban communities all across the country. And in the years to come, one of the greatest sources of housing demand in the country—and particularly in the suburbs—will be from people who come to the United States from other countries. New research I recently completed with the ULI Terwilliger Center for Housing takes a look at the housing and residential location choices of immigrant households.

New immigrants could account for one-third of all household growth over the next decade, adding approximately 3.4 million new households, including nearly a million new home owners. For planners, public officials, housing advocates, and the real estate industry, this growth poses several questions: Where will immigrant households settle? What types of neighborhoods and housing will they choose? And how will they continue to change the face of the nation’s suburbs?

The potential impact of the foreign-born population on local housing markets—and the extent to which these immigrants will be homeowners or renters, suburbanites or city dwellers—depend on the socioeconomic characteristics of the people themselves, as well as on the regions in which they settle. In some cases, the growing immigrant population may fuel continued population growth in central cities. But in many instances, immigrants will be a key source of demand for single-family housing in the suburbs. The dream of homeownership—and particularly suburban homeownership—remains strong among newcomers to the United States.

Prior research has documented the growth in the suburban foreign-born population, as new immigrants are attracted to job opportunities and lower housing costs in the suburbs. I used a newtypologyof suburban places  that was developed by ULI and RCLCO in 2016 to analyze the residential locations of immigrants in five metropolitan areas–San Francisco, Houston, Minneapolis-St. Paul, Charlotte and Buffalo.

More immigrants live in the suburbs than in urban areas of these five metro areas, and immigrants from diverse socioeconomic backgrounds live in the suburbs. Immigrants are somewhat more likely to live in closer-in suburban locations than are native-born populations, but the immigrant population is growing in all types of suburbs, from economically challenged suburbs to high-end suburbs.

For example, in the Charlotte metropolitan area, about 90 percent of the foreign-born population lives in the suburbs, compared to 87 percent of the native-born population. About a quarter of the region’s foreign-born population lives in economically challenged suburbs, but about a fifth live in stable middle-income suburbs and another fifth live in established high-end suburbs. In fact, foreign-born residents in the Charlotte metro area are slightly more likely than native-born residents to live in the region’s established high-end suburbs.

There are similar patterns across the other five metro areas examined. 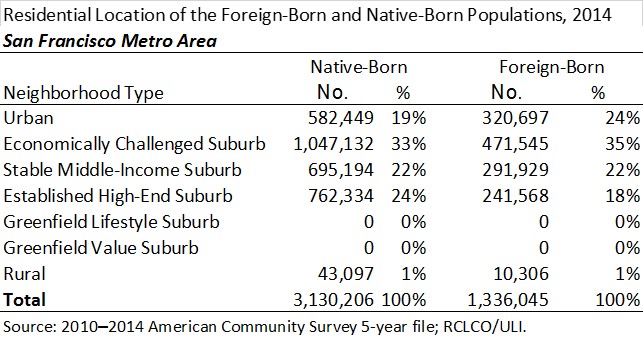